Register to take part in a study today 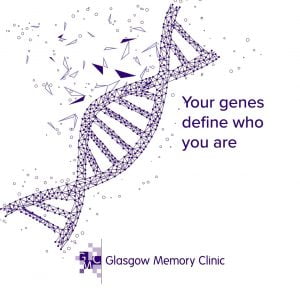 What is the connection between your genes and Alzheimer’s?

Nature of nurture? The cause of Alzheimer’s disease – is probably a combination. While genes may not be our destiny, there are certain genes that can either increase or decrease our risk of developing Alzheimer’s disease. At Glasgow Memory clinic we look to understand the connection between your genes and Alzheimer’s.

The most studied gene to date with the largest effect on our Alzheimer’s risk is called APOE. When it comes to our DNA everyone has 23 chromosomes that are a mix from your mother and father, and there are different variants. Everyone has two copies of the APOE gene (one from each parent), which can take three forms (E2, E3, E4). APOE2 is the least common and APOE3 the most common, whilst possession of an APOE4 risk gene increases risk for Alzheimer’s disease.

25% of the population carry a single copy!

We know the APOE4 gene can increase our overall risk of developing Alzheimer’s but having a copy doesn’t mean people will definitely develop the disease. There is a combination of risk factors which play a role in determining individual risk, which include age, lifestyle and genetics.

Some people don’t want to find out but some research to date has found that even if you carry a risk gene, there are still things you can do to reduce your risk.

There is still a lot to be understood about these genes, and further research to better understand the most impactful Alzheimer’s risk gene is crucial for building a more complete picture of the development of the disease.

The APOLLOE4 study is now recruiting volunteers and seeks to find those who have 2 copies of the APOE4 gene and who are at high risk of developing Alzheimer’s disease. The initial screening process for the study is a simple blood test. There is no cost to take part in any of our studies and suitable volunteers could gain access to cutting edge treatments that aren’t available outside a trial setting, whist contributing to the medical research surrounding this complex disease.

The APOLLOE4 Study is testing an investigational drug to find out whether it may slow the progression of Alzheimer’s disease. At this time there are no approved drugs that halt or arrest the clinical decline typical of Alzheimer’s disease. The study drug is an oral tablet that is taken twice daily with food. It has been well tolerated in earlier studies and may be a convenient option for Alzheimer’s patients.

Find out if you are suitable to take part in this research study which will include screening for the APOE4 gene, or another study by completing our short pre-screener today or give us a call on 0141 948 0206 to speak to one of our friendly patient liaison team who will be happy to discuss the criteria requirements with you.

This website uses cookies to improve your experience while you navigate through the website. Out of these cookies, the cookies that are categorized as necessary are stored on your browser as they are essential for the working of basic functionalities of the website. We also use third-party cookies that help us analyze and understand how you use this website. These cookies will be stored in your browser only with your consent. You also have the option to opt-out of these cookies. But opting out of some of these cookies may have an effect on your browsing experience.
Necessary Always Enabled
Necessary cookies are absolutely essential for the website to function properly. These cookies ensure basic functionalities and security features of the website, anonymously.
Functional
Functional cookies help to perform certain functionalities like sharing the content of the website on social media platforms, collect feedbacks, and other third-party features.
Performance
Performance cookies are used to understand and analyze the key performance indexes of the website which helps in delivering a better user experience for the visitors.
Analytics
Analytical cookies are used to understand how visitors interact with the website. These cookies help provide information on metrics the number of visitors, bounce rate, traffic source, etc.
Advertisement
Advertisement cookies are used to provide visitors with relevant ads and marketing campaigns. These cookies track visitors across websites and collect information to provide customized ads.
Others
Other uncategorized cookies are those that are being analyzed and have not been classified into a category as yet.
Save & Accept
Powered by